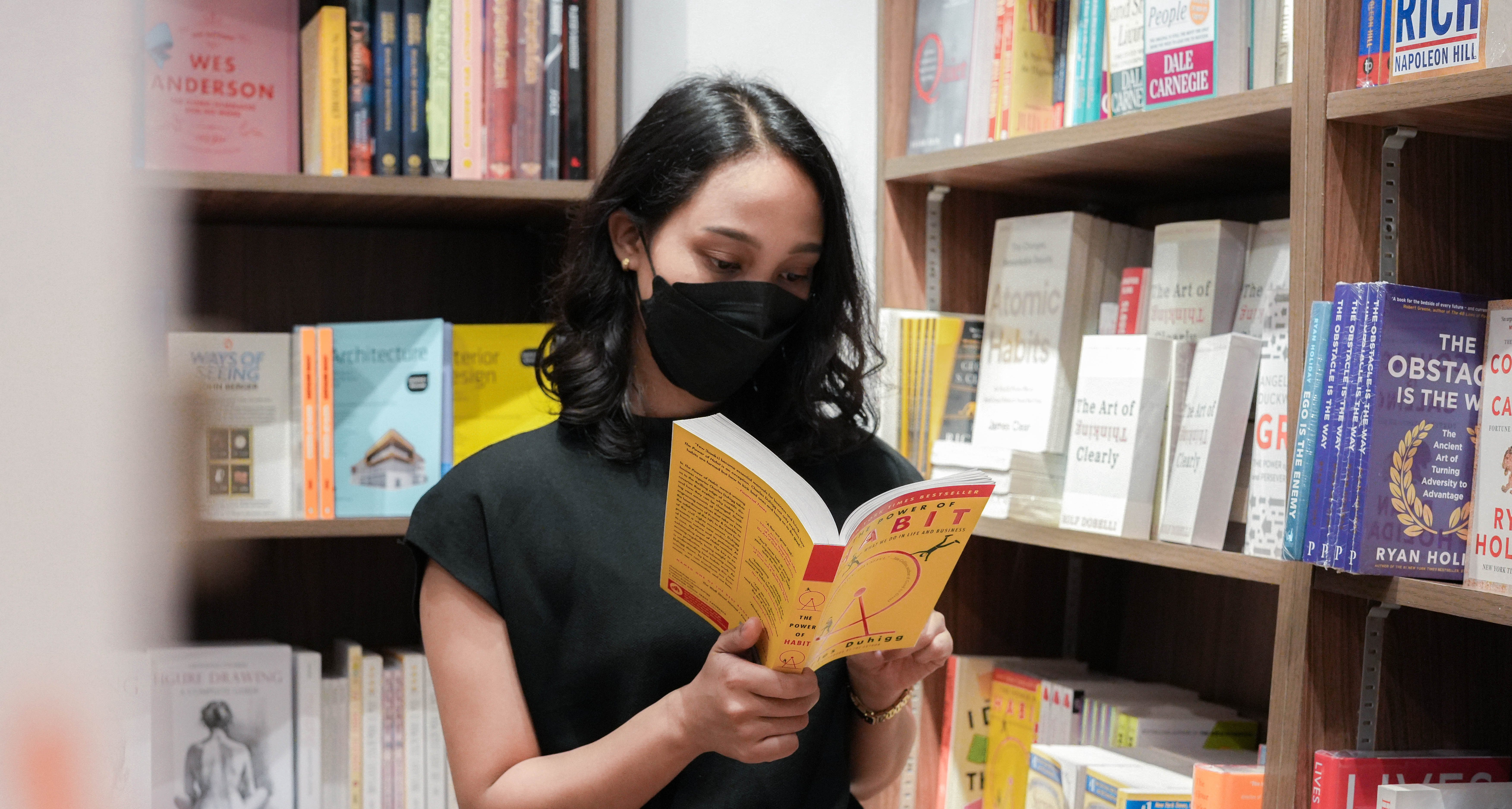 From Paper to Reality: Books That Shaped the World’s Most Successful People

By Omni Channel SolutionsOctober 18, 2022No Comments

While not everyone may have the same affinity for books as bibliophiles do, ‘reading’ remains to be an essential aspect of learning. Through reading, our knowledge is constantly developed, our vocabulary improved and our writing ability enhanced. Reading is also a huge form of leisure for some people; some use it as a form of entertainment, an escape from the real world, and a way to ignite one’s imagination.

In the words of American celebrity drag queen RuPaul (although in a different context), ‘Reading is fundamental.‘

So, contrary to popular belief, reading isn’t just for nerds. Not that there’s anything wrong with nerds, anyway. Many of the world’s most influential people were and are still self-proclaimed nerds. And despite their grueling day jobs of having to manage multi-billion dollar empires or lead a country, they still find the time to pick up a book and read.

Here are some of the world’s most influential people and their favorite books.

In 2015, Mark Zuckerberg started a book club called A Year of Books, and in that year, he managed to recommend and discuss at least 23 books, which he believes are titles that highly influence society and business. Check out some of his favorites below:

Sapiens: A Brief History of Humankind by Yuval Noah Harari

In Sapiens, Dr Yuval Noah Harari explores the whole of human history from the very first humans to walk the earth to the radical breakthroughs of Cognitive, Agricultural and Scientific revolutions. This book looks into how far humans have come in just a few millennia. Also recommended by Bill Gates and Barack Obama.

The Three-Body Problem by Liu Cixin

Set against the backdrop of China’s Cultural Revolution, an alien civilization on the brink of destruction captures the signal of a Chinese-based secret military project and then creates plans to invade Earth. Meanwhile on Earth, different camps start forming, planning to either help the aliens with their plot or stop the invasion.

This may not be a well-known fact to many, but Amazon was initially launched as a website to sell books which is a reflection of Jeff Bezos’ love for books. He’s also shared in multiple interviews that a lot of the books that inspired him helped him become a multi-millionaire, such as:

Creation: Life and How to Make It by Steve Grand

Creation plumbs the practical, social, and ethical aspects and implications of artificial life.This book also gives readers access to the insights British computer scientist Steve Grand acquired in the architecture of artificial life engine, Creatures. According to Bezos, this book was influential in the creation of Amazon Web Services.

The Remains of the Day by Kazuo Ishiguro

Set in 1956 Europe, Nobel Prize winning author Kazuo Ishiguro shares the story of Darlington Hall’s devoted butler Stevens, who takes on a six-day journey to the West Country where he revisits his past as a soldier in World War II and explores an unrealized love affair with his housekeeper. In case you aren’t a reader, this book has a film adaptation starring Anthony Hopkins and Emma Thompson released in 1993.

Barack and Michelle Obama, former US president and first lady

This ultimate power couple have always been voracious readers (and also letter writers) as individuals. Barack Obama has also consistently shared his seasonal reading list every year, with books ranging from literary fiction to mystery thrillers to historical fiction and to non-fiction.

A Gentleman in Moscow by Amor Towles

Amor Towles takes his readers on an immersive journey through the life of Count Alexander Rostov in late 1930s Manhattan who is forced to live the rest of his life inside the Metropol after being sentenced to house arrest by the Bolshevik tribunal.

Pulitzer Prize–winning poet Natasha Trethewey explores her experience of pain, loss, and grief following the death of her mother in the hands of her step-father one faithful day in 1985 on Memorial Drive in Atlanta.

In her latest memoir, Becoming, Michelle Obama detailed some of her all-time favorite books and the ones she considers her ‘go-to’ whenever she needs life advice.

Conversations with Myself by Nelson Mandela

Described as an ‘intimate journey from Mandela’s first stirrings of political consciousness to his galvanizing role on the world stage’, Conversations with Myself offers a ‘unique access’ to Nelson Mandela’s private life. According to Michelle Obama, she likes to flip through this book from time to time because it always gives her the boost she needs.

An American Marriage by Tayari Jones

A profoundly insightful look into the life of Celestial and Roy, a newly married African American couple and how they are ripped apart by an unimaginable circumstance when Roy is suddenly incarcerated for a crime he didn’t commit. A thought-provoking read on race-based injustice in the US prison system.

If you think rocket scientists don’t have the time to read books because they’re too busy… building rocket ships, you thought wrong. In an interview with Esquire magazine, Elon Musk confessed that reading books is how he learned to build rockets.

The Hitchhiker’s Guide to the Galaxy by Douglas Adams

A childhood favorite of Elon Musk and one of the books that helped him deal with his existential crisis, The Hitchhiker’s Guide to the Galaxy is a pop culture sci-fi classic about the misadventures of the last surviving man, Arthur Dent, after the Earth was demolished by a space fleet. Also nominated as one of America’s best-loved novels by PBS’s The Great American Read.

An epic science fiction trilogy about the waning days of the Galactic Empire as foreseen by mathematician Hari Seldon and how he devises a plan to preserve the spirit of science and civilization. This series, according to Elon Musk, is fundamental in the creation of SpaceX.

Although Oprah is another well-known voracious reader, some may still not be aware of her book club, which dates back to its inception in 1996. Although it was discontinued for a year in 2022, Oprah’s Book Club relaunched in 2003 stronger than ever and is still going strong to this day. If you’re still not a part of this club, now’s your chance!

One of Oprah’s highly recommended books that explores how it means and costs to be a black woman in America. Sula immerses its readers into a story of two black women who grew up together, fell apart in their journey to womanhood, and then found one another again.

If at Birth You Don’t Succeed by Zach Anner

In this witty and heartfelt memoir, comedian Zach Anner shares about how finding your own passion and path in spite of the epic misadventure of ‘botching his own birth’ by being born two months early with cerebral palsy. In an editorial review, Oprah said, “Zach makes you want to be a better person, with his humor and his heart and everything he’s had to deal with from the time he was born. I’ve never met anyone like him, and I’ve met a lot of people.”

Known as the powerhouse behind the iconic dramas Grey’s Anatomy, Private Practice, Scandal, and several hit series on Netflix such as Bridgerton and Inventing Anna, Shonda Rhimes is no stranger to a delicious story. As a child, she’s always loved to read as detailed in her memoir

Year of Yes: How to Dance It Out, Stand In the Sun and Be Your Own Person.

Presence: Bringing Your Boldest Self to Your Biggest Challenges by Amy Cuddy

In Presence, Harvard Professor Amy Cuddy presents the enthralling science underlying these and many other fascinating body-mind effects, and teaches us how to use simple techniques to liberate ourselves from fear in high-pressure moments, perform at our best, and connect with and empower others to do the same. Cuddy has also gained several followers through her TED Talk ‘power poses’.

One of the classic romantic mysteries of all time, Bronte tells the story of an orphaned girl named Jane who falls in love with Edward Rochester of Thornfield Hall but there’s a terrified secret that needs to be unfolded. In the words of Shonda Rhimes, Jane Eyre is “one of those that when you read it, kinda changes you.”

Build your business with us today.
Make a difference. Create an impact.

Get the latest updates via email!

Close Menu
We use cookies on our website to give you the most relevant experience by remembering your preferences and repeat visits. By clicking “Accept”, you consent to the use of ALL the cookies.
Do not sell my personal information.
Cookie SettingsAccept
Manage consent

This website uses cookies to improve your experience while you navigate through the website. Out of these, the cookies that are categorized as necessary are stored on your browser as they are essential for the working of basic functionalities of the website. We also use third-party cookies that help us analyze and understand how you use this website. These cookies will be stored in your browser only with your consent. You also have the option to opt-out of these cookies. But opting out of some of these cookies may affect your browsing experience.
Necessary Always Enabled
Necessary cookies are absolutely essential for the website to function properly. These cookies ensure basic functionalities and security features of the website, anonymously.
Functional
Functional cookies help to perform certain functionalities like sharing the content of the website on social media platforms, collect feedbacks, and other third-party features.
Performance
Performance cookies are used to understand and analyze the key performance indexes of the website which helps in delivering a better user experience for the visitors.
Analytics
Analytical cookies are used to understand how visitors interact with the website. These cookies help provide information on metrics the number of visitors, bounce rate, traffic source, etc.
Advertisement
Advertisement cookies are used to provide visitors with relevant ads and marketing campaigns. These cookies track visitors across websites and collect information to provide customized ads.
Others
Other uncategorized cookies are those that are being analyzed and have not been classified into a category as yet.
SAVE & ACCEPT
wpDiscuz
0
0
Would love your thoughts, please comment.x
()
x
| Reply